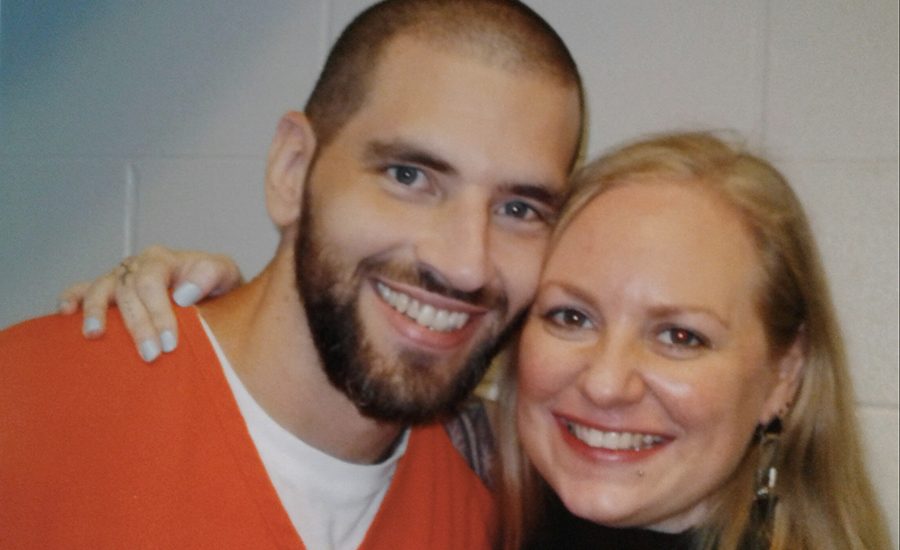 Because it’s my birthday and it’s the first time I’m around for it and it’s also visit day, Alan had planned many things to treat me. But it’s prison, things never go the way you’d like them to.

We took a couple of pictures first, but the sergeant decided we had to retake the good one because I was behind him… He is not allowed to be behind me, and we take the same picture almost every week, whatever. Disappointed because I look good on like 1 picture on 55 there, I still take it with a smile, and we pose again, being careful to stay next to each other. Alan loves the new pic, we don’t lose.

He wants to cook for me and to make me a cake. Canteen is out of almost everything, he can’t make a cake but what he cooks is big for two and I don’t need a cake 😊. He is just too adorable and I’m happy.

He smiles at me because “you look so cute” and says he wants to take me home. “I am home ☺”. He is home.

He has a few gifts he made and I received a portrait of me this week. He really doesn’t have to try that hard but I love the messages he puts in everything. I feel spoiled.

We talk about my favorite movie and he listens to my stories about Gus Van Sant for a long time and he is genuinely interested and I want to marry that man again.

We talk about trypophobia 🤢 and he keeps taking the skin 😱 as an example and I think marrying him once was enough.

We get up to warm some water and he kisses me. He gets in trouble. Being yelled at is not nice but he is more upset because the officer says something like “you’ve been doing stuff all day” when we literally only have been looking at each other and talking, up to now. I see Alan is very frustrated and I see the anger coming up. He is not saying anything but his eyes become red and I know he’ll cry in a minute. I hold his hand and ask him what is bothering him that much. He doesn’t want/can’t reply, I’d like to know so I could ease the pain before it bursts out… Too late, he whispers “because that’s our life” and he breaks down. I want to get closer and put my hand on his face or my arm around it – as I usually do when that happens, but I feel the officer watching and I don’t want us to get in more trouble so I have to painfully watch him cry 💔. I try to wipe his tears, while fighting my own. He says he is supposed to be the strong one, I call bullshit on that, everybody knows I’m the strong one 😆. He calms down but the tears won’t stop, we laugh about it. He says “I wish you had a better birthday”. I’d spend my day crying with him, it would still be better than any other day.

We move on to another subject, I get one more gift, and it’s already time to say goodbye. I can hug him, finally.

I go home and look at my phone, see many birthday messages from my friends overseas, a cute video of my niece (whom I miss a lot), and a message from one of my ex pen pals (out and free now) that says “Happy birthday to a friend who was always there for me”… and now I’m the one crying.

My in-laws then take me out for dinner, I’m full for a week and birthday girl gets a free cheesecake. Not the dessert I wish I could bring back to the house though 😉.

I’m simply happy I could see Alan after 3 weeks. I wish I didn’t make his life harder but I feel very loved and it’s amazing ❤.